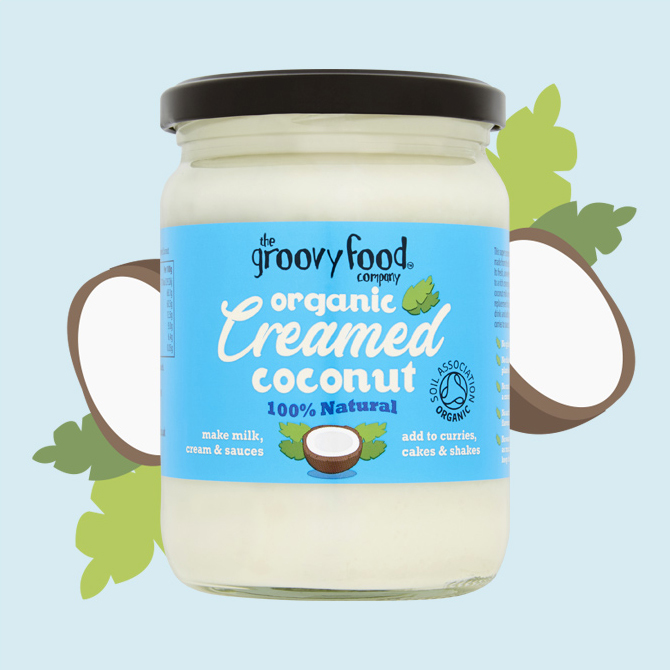 Our new Organic Creamed Coconut is made from the freshest unsweetened coconut meat and pulverised to create a rich, deliciously sweet, creamy paste, providing a great plant-based alternative to milks and creams.

A versatile kitchen essential, a simple spoonful can be combined with water to make a coconut milk or coconut cream or used as a replacement for desiccated coconut.  It is delicious added to drinks and used in shakes, and is also a great cooking ingredient, adding a rich aroma and flavour to many dishes: from curries to sauces, bakes to cakes.

Our Creamed Coconut is sourced from Soil Association certified organic coconut plantations in South East Asia and is a greener alternative to readymade coconut milks, as each 500g jar of creamed coconut is the equivalent to five cans of coconut milk, meaning less packaging and less waste; as you can make as much as you need.

To quickly and easily create coconut milk and coconut cream from scratch, follow these simple methods below:

Packed with goodness, coconut contains zero trans-fat and is rich in antioxidants. It also contains around 34% lauric acid, which is a medium chain fatty acid and has been proven to provide an immediate source of energy, rather than being stored as fat. It’s also vegan, raw, dairy, nut and gluten-free.